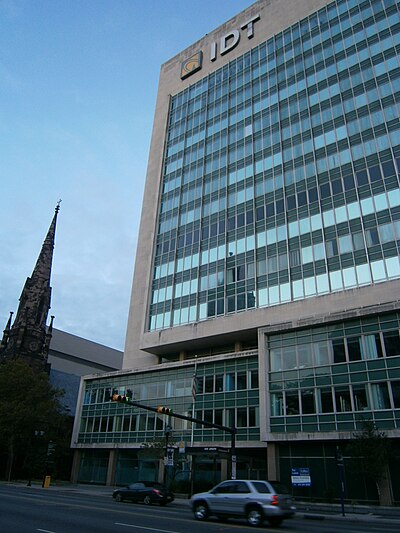 Mutual Benefit Life was taken into receivership for rehabilitation by the New Jersey Department of Banking and Insurance on July 16, 1991, after losses in an overheated real estate market led to a run by policyholders, who ultimately lost the purported "cash value" that had been said to have accrued in their policies. At the time, the collapse was the largest ever of an American insurer. AMEV acquired the group life, accident and health insurance Mutual Benefit in 1991. SunAmerica acquired the remaining divisions in 1998. Effective June 14, 2001, Mutual Benefit was liquidated and dissolved.

Mutual Benefit commissioned a number of landmark buildings in Newark for their headquarters.

After outgrowing previous locations at Broad and Market (from the 1845 founding to 1848), then another ten years in the Insurance Buildings on Market Street, the company built a headquarters at the corner of Broad and Clinton in 1858. The architect is unknown.

In 1904, Mutual Benefit pulled down the 1858 structure and commissioned a replacement through competition. The winner was architect George B. Post, who planned a neo-classical structure for eight stories, giant order Corinthian columns, and a $1,000,000 budget. Because the site was diagonally opposite a set of commanding, fortress-like buildings for the Prudential Headquarters, also designed by Post, a contrasting identity was a key requirement: "The problem was to design a building as different as possible from the Prudential Building, and at the same time make it indicative of the strength and greatness of an important insurance company."

The company's uptown headquarters building at 300 Broadway in Newark was designed by locally important architects John H. & Wilson C. Ely. Finished in 1925, it's listed in the National Register of Historic Places. In the mid 1950s the building was sold to the Archdiocese of Newark and served as home to Essex Catholic High School until 1979. The building was again sold, and as of 2018 serves as a nursing home.

The company moved to larger headquarters at 520 Broad Street in 1957, a modern structure that was built in the International Style as part of the New Newark movement and centered to the north of traditional downtown at Washington Park. The architects were Frank Grad & Sons of Newark, with consulting architects Eggers & Higgins. As of December 2012 there were plans to convert the building, owned by the IDT Corporation, to residential and retail space marketed to the city's student population'

The Mutual Benefit Life Building in Philadelphia is another structure associated with the firm.