Marylawn of the Oranges High School 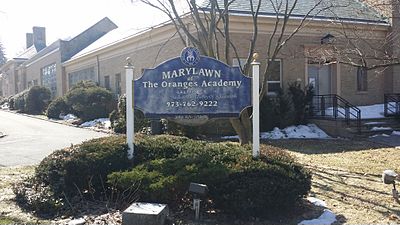 Marylawn of the Oranges Academy was an all-girl, private, Roman Catholic college-preparatory high school for young women grades 7 through 12 located in South Orange, New Jersey. Sponsored by the Sisters of Charity of Saint Elizabeth since its founding in 1935, Marylawn is located within the Roman Catholic Archdiocese of Newark. The school had been accredited by the Middle States Association of Colleges and Schools Commission on Secondary Schools since 1962.

As a learning community, students are challenged by a rigorous academic curriculum and opportunities that foster their initiative, creativity, self-respect and concern for others. As the message of Jesus Christ is proclaimed, students grow morally and intellectually- demonstrating integrity, self-discipline and Christian values and ethics.

For over ten years before it closed, Marylawn had a 100% graduation and 100% college acceptance rate.

Since March 2018, the former site of the high school has been the home of the STEM Innovation Academy, a joint effort of Montclair State University, the New Jersey Institute of Technology, the Orange Board of Education and Orange, New Jersey.

The Marylawn of the Oranges High School Lady Knights competed in the Super Essex Conference, following a reorganization of sports leagues in Northern New Jersey by the New Jersey State Interscholastic Athletic Association.

The mission of Marylawn of the Oranges Academy is to prepare, motivate, and challenge young women, intellectually and morally, to assume their roles in society according to Catholic tradition and in the founding spirit of the Sisters of Charity of New Jersey.

Marylawn of the Oranges High School