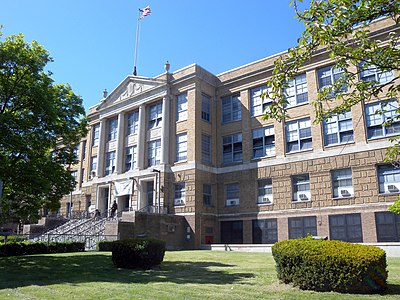 Clinton Township, which included what is now Irvington, Maplewood and parts of Newark and South Orange, was created on April 14, 1834. The area was known as Camptown until the mid-1800s. In 1850, after Stephen Foster published his ballad, Camptown Races, residents were concerned that the activities described in the song would be associated with their community. The town was renamed, Irvingtown, in honor of Washington Irving.

Irvington was incorporated as an independent village on March 27, 1874, from portions of Clinton Township. What remained of Clinton Township was absorbed into Newark on March 5, 1902. On March 2, 1898, Irvington was incorporated as a Town, replacing Irvington Village. In 1982, the town was one of four Essex County municipalities to pass a referendum to become a township, joining 11 municipalities that had already made the change, of what would ultimately be more than a dozen Essex County municipalities to reclassify themselves as townships in order take advantage of federal revenue sharing policies that allocated townships a greater share of government aid to municipalities on a per capita basis.

The 1967 Newark riots hastened an exodus of families from that city, many of them moving a few short blocks into neighboring Irvington. Until 1965, Irvington was almost exclusively white. By 1980, the town was nearly 40% black; by 1990 it was 70%. On July 1, 1980, Fred Bost, the first black person to serve on the Town Council, was sworn in as East Ward Councilman. Michael G. Steele, at age 24 became the first black elected to public office in Irvington when he won a seat on the school board on March 25, 1980, then became ten years later the town's first black mayor, elected in 1990 and served 4 years, followed by Sarah Brockington Bost in 1994. In 1994 Steele returned to the Board of Education to pursue his career as the district's certified School Business Administrator, serving over 22 years. The current Mayor is Tony Vauss.

Irvington was home to Olympic Park, an amusement park, from 1887 to 1965. The park property straddled the border of Irvington and Maplewood with the main entrance on Chancellor Avenue and a side entrance on 40th St. After the park closed, the merry-go-round was sold and transported to Disney World, in Orlando, FL. The book, Smile: A Picture History of Olympic Park, 1887–1965 written by Alan A. Siegel was published in 1983 by Rutgers University Press.

The Elizabeth River runs through the city passing Civic Square and Clinton Cemetery. Unincorporated communities, localities and place names located partially or completely within the township include Irving Place.

The township is bordered by Maplewood to the west, Newark to the east and Hillside to the south, all in Essex County; and by Union to the southwest in Union County, New Jersey.

As part of the 2000 Census, 81.66% of Irvington's residents identified themselves as being Black or African American. This was one of the highest percentages of African American people in the United States, and the third-highest in New Jersey (behind Lawnside at 93.6%, and East Orange at 89.46%) of all places with 1,000 or more residents identifying their ancestry.

There were 22,032 households out of which 33.9% had children under the age of 18 living with them, 30.2% were married couples living together, 27.6% had a female householder with no husband present, and 34.6% were non-families. 29.3% of all households were made up of individuals and 6.4% had someone living alone who was 65 years of age or older. The average household size was 2.74 and the average family size was 3.39.

Irvington experienced the crack epidemic of the 1980s and has struggled with its aftermath. The township's violent crime rate was six times higher than New Jersey overall and the murder rate eight times higher than statewide statistics. In 2007, the New Jersey State Police reported that Irvington had a violent crime rate of 22.4 incidents per 1,000 population, the highest of all 15 major urban areas in the state.

Portions of the township are part of an Urban Enterprise Zone (UEZ), one of 32 zones covering 37 municipalities statewide. Irvington was selected in 1996 as one of a group of seven zones added to participate in the program. In addition to other benefits to encourage employment and investment within the UEZ, shoppers can take advantage of a reduced 3.3125% sales tax rate (half of the ​6 5⁄8% rate charged statewide) at eligible merchants. Established in May 1996, the township's Urban Enterprise Zone status expires in May 2027.

In July 2015, the central business district surrounding the Springfield Avenue bus stop was designated as one of 33 transit villages statewide, qualifying it for incentives for revitalization.

Irvington is governed within the Faulkner Act, formally known as the Optional Municipal Charter Law, under the Mayor-Council form of municipal government, one of 71 of 565 municipalities statewide that use this form. The governing body is comprised of the Mayor and the seven-member Township Council, whose members are elected in non-partisan elections held in even-numbered years on the second Tuesday in May to four-year terms of office. The mayor and the three at-large seats are elected together and two years later the four ward seats are elected. The council selects a president, first vice president and second vice president from among its members at a reorganization meeting held after each election. The council is the legislative body of the township and needs a ⅔ majority to make changes to the budget submitted by the mayor. The mayor is the township's chief executive and is responsible for overseeing the day-to-day operations and submitting a budget, but is not eligible to vote on the council and is not required to attend its meetings.

In April 2019, Jamillah Z. Beasley was appointed to fill the South Ward seat expiring in December 2020 that became vacant following the death of Sandra M. Jones.

Irvington is located in the 10th Congressional District and is part of New Jersey's 28th state legislative district.

For the 2018–2019 session (Senate, General Assembly), the 28th Legislative District of the New Jersey Legislature is represented in the State Senate by Ronald Rice (D, Newark) and in the General Assembly by Ralph R. Caputo (D, Nutley) and Cleopatra Tucker (D, Newark).

The Irvington Public Schools serve students in pre-kindergarten through twelfth grade. The district is one of 31 former Abbott districts statewide, which are now referred to as "SDA Districts" based on the requirement for the state to cover all costs for school building and renovation projects in these districts under the supervision of the New Jersey Schools Development Authority.

People who were born in, residents of, or otherwise closely associated with Irvington include: