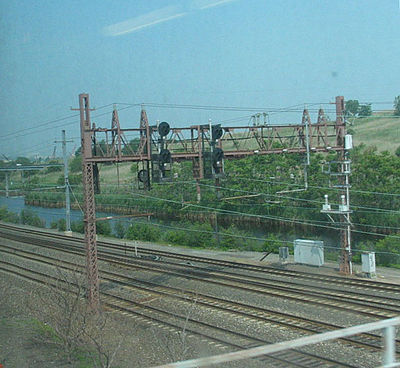 The Kearny Connection in Kearny, New Jersey allows suburban passenger trains from New Jersey Transit's Morris and Essex Lines, on the Hoboken Division, to run to New York Penn Station on the Newark Division, instead of their traditional northern terminus of Hoboken Terminal. New Jersey Transit dubbed the new service Midtown Direct; the connection opened on June 10, 1996. The project took three years, and $70 million to build. The project cut travel time by 20 minutes, eliminating the need to go first to Hoboken and transfer to PATH. Two tracks, one on each side of the Northeast Corridor (NEC), carry trains from the DL&W main line, which passes under the NEC, northeast onto the NEC. The new junction on the NEC is designated "Swift Interlocking" and is seven miles west of New York.

Of 138 inbound and 150 outbound daily weekday trains on the three Morris and Essex Lines, 73 inbound and 71 outbound trains (about 50%) use the Kearny Connection.

The Kearny Connection lies immediately north of the Waterfront Connection, and serves the complementary purpose. The two connections allow any trains originating from the west of Kearny, regardless of line, to terminate at either Hoboken or New York Penn Station.

Both rail lines power trains from AC catenary, but the two lines use different voltage/frequency. The Northeast Corridor (former Pennsylvania Railroad) runs at 12 kV/25 Hz, while the Morris and Essex Lines (former DL&W) run at 25 kV/60 Hz. ALP-44, ALP-46, and ALP-45DP locomotives and the future Multilevel III EMUs can switch between the two electrical systems while traveling through the junction.

A related interconnectivity improvement was the opening of the Secaucus Junction station seven years later. This station links all NJ Transit trains, except the Raritan Valley Line, Princeton Branch and the Atlantic City Line, with all New York Penn terminating trains on the upper level and the Main Line and the Pascack Valley Lines on the lower level.