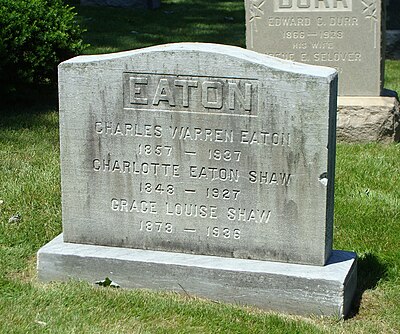 Bloomfield Cemetery is one of New Jersey’s most significant rural cemeteries, and the only such landscape to be designed by Alexander Jackson Davis, one of America’s most important Victorian architects. Like nearby Mount Pleasant Cemetery (in Newark), it contains the graves of numerous individuals, families and social groups that were important to the history of Essex County and New Jersey as a whole. Parts of the landscape are recognizable as examples of picturesque cemetery design, and many 19th century markers evince characteristics of funerary art common during the Rural Cemetery Movement (c. 1840-1880).

The Presbyterian Church burial ground in Bloomfield was a resting place for many veterans of the Revolutionary war, as might be expected for an Essex County town that had a significant 18th century population. Many names belong to the prominent families that helped to found Bloomfield, including members of the Dodd, Davis, Baldwin and Ward clans. Officers interred in the “Old Ground” included Captain Isaac Harrison (1757-1823) in Lots 22 and 23, Captain Jesse Baldwin (1754-1805) in Lot 51, Captain William Crane (1757-1832) in Lot 112, and Captain John Collins (1754-1806) in Lot 64. Others among the 32 marked burials were generally enlisted men. Moreover, the cemetery also has a large number of Civil War veterans from the town, many marked with elaborate symbols of valor and patriotism.

More importantly, Bloomfield Cemetery contains the remains of a large number of political, cultural and civic leaders who contributed to the growth of the nation over a period of three centuries. These include