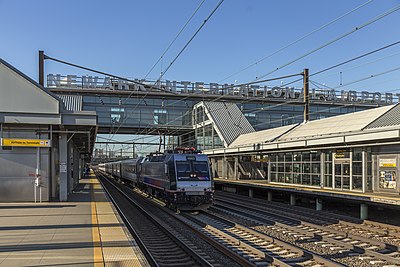 Newark Liberty International Airport Station (also known as Newark International Airport Station and the Rail Link station) is a railroad station on the Northeast Corridor (NEC) in Newark, New Jersey. The station provides access to Newark Liberty International Airport (EWR) via the AirTrain monorail which connects the station to the airport's terminals and parking areas. It is served by New Jersey Transit's (NJT) Northeast Corridor Line and North Jersey Coast Line and Amtrak's Northeast Regional and Keystone Service trains. The station, located in the Dayton neighborhood of the city, has no pedestrian access, bus service, parking facility, or drop-off area.

The station opened on October 21, 2001. It is owned by the Port Authority of New York and New Jersey (PANYNJ), the airport's operator, and therefore has a different design than NJT and Amtrak stations, especially the signage, which is the same as used throughout the airport. The Port Authority originally intended to name the station "Newark Airport" but changed it to "Newark Liberty International Airport" after the airport's renaming, which honors the victims of the September 11 attacks and the proximity of the airport to the Statue of Liberty.

Passengers connecting between the Northeast Corridor and AirTrain Newark must pass through faregates and pay a fee. This fee is usually included in the ticket price and encoded on magnetic stripes of NJT tickets with the station as the origin or destination (denoted with **EWR**). Monthly pass holders who do not have Newark Airport as the origin or destination for their pass need to pay the fee, which is waived for children 11 and under. There is a staffed Amtrak ticket counter between AirTrain and the NEC platforms. Although there are NJ Transit staff on site, passengers are required to use the ticket vending machines (TVMs) on either side of the faregates for NJT service.

NJ Transit trains typically stop on the outer platform tracks, while Amtrak trains typically stop on the inner platform tracks. The two center tracks, which do not serve the station, are often used by express NJ Transit trains, as well as Amtrak service that does not stop here (the Acela Express, some Northeast Regional, most Keystone trains, and all long-distance services).

In September 2012, the Port Authority of New York and New Jersey announced that work would commence on a study to explore extending the PATH system to the station. The new station would be located at ground level to the west of the existing NJ Transit station. A storage yard for PATH trains would also be built. There would be a park and ride facility at the stop, with a new entrance to the surrounding Dayton neighborhood, and an overpass to the existing NJ Transit and AirTrain platforms.

In 2014, the PANYNJ proposed a 10-year capital plan that included the PATH extension, which was approved by the Board of Commissioners on February 19 of that year. However, in late 2014, there were calls for reconsideration of Port Authority funding priorities. The PATH extension followed the route of existing Manhattan-to-Newark Airport train service , while there was no funding for either the Gateway Tunnel under the Hudson River, or the replacement of the aging and overcrowded Port Authority Bus Terminal.

On January 11, 2017, the PANYNJ released its 10-year capital plan that included $1.7 billion for the extension. Under the plan, construction is projected to start in 2020, with service in 2026. Two public meetings on the project were scheduled for early December 2017.