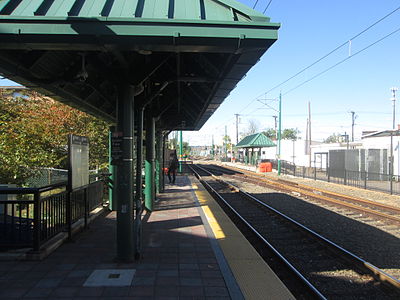 Silver Lake station is a surface station in Belleville, New Jersey on the City Subway Line of the Newark Light Rail, and the southernmost one on the line outside of the city of Newark. It is located at 208 Heckel Street (a dead end street), intersects with Franklin Street, and lies alongside trackage owned by Norfolk Southern. The station was built in 2002 on the site of a former station owned by the New York and Greenwood Lake Railway, a subsidiary of the Erie Railroad.