Bayonne Board of Education 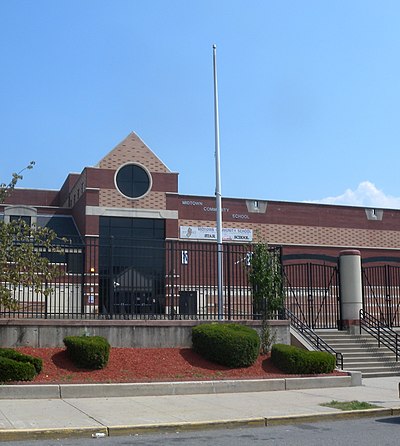 Bayonne Board of Education is a comprehensive public school district serving students from pre-kindergarten through twelfth grade from Bayonne in Hudson County, New Jersey.

The district is classified by the New Jersey Department of Education as being in District Factor Group "CD", the sixth-highest of eight groupings. District Factor Groups organize districts statewide to allow comparison by common socioeconomic characteristics of the local districts. From lowest socioeconomic status to highest, the categories are A, B, CD, DE, FG, GH, I and J.

After the state rejected a budget plan that would have cut 85 positions and raised taxes by almost 4%, the board of education voted in April 2017 to cut a total of 300 positions, including 260 non-tenured teachers, to achieve $6 million in savings from the earlier proposed $133 million budget.

During the 2008-09 school year, Public School #14 Gifted & Talented was recognized with the National Blue Ribbon School Award of Excellence by the United States Department of Education, the highest award an American school can receive. In 2009-2010, Washington Community School was awarded the Blue Ribbon Award.

For the 2004-05 school year, Mary J. Donohoe No. 4 School was named a "Star School" by the New Jersey Department of Education, the highest honor that a New Jersey school can achieve. It is the fourth school in Bayonne to receive this honor. The other three are Bayonne High School in 1995-96, Midtown Community School in 1996-97 and P.S. #14 in the 1998-99 school year.

During the 2008-2009 school year, Washington Community School was awarded the ASCA Honor Council Excellence Award, which is given to school's Student Councils who have met the requirements and completed projects in the areas of in leadership, citizenship, and community service.

Schools in the district (with 2017-18 enrollment data from the National Center for Education Statistics) are:

The Bayonne Board of Education has implemented a dress code that took effect in the 2006-2007 school year for students in Pre-K through 8th grade. The plan was intended to "increase student identification with their schools and the district, Eliminate many of the distractions associated with differences in social or economic status, Allow the children, their teachers and the Board of Education to concentrate on shared pursuit of educational excellence and Instill a sense of belonging and school pride". A heated battle was fought between enraged parents and grandparents and the Board, with parents and grandparents upset at the manner in which the policy was imposed, the cost of the uniforms, the loss of freedom of expression to students in choosing the clothing they wear and issues regarding the manner in which the contract was awarded.

Core members of the district's administration are:

The district's board of education has nine members who set policy and oversee the fiscal and educational operation of the district through its administration. As a Type II school district, the board's trustees are elected directly by voters to serve three-year terms of office on a staggered basis, with three seats up for election each year held (since 2015) as part of the November general election.

In a November 2015 referendum, voters approved by a 3-1 margin a change from a Type I (appointed) to Type II (elected) school board.

Bayonne Board of Education