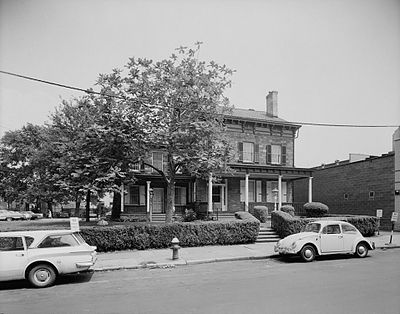 The house was built in 1750; there was an addition added in the 1820s. The house may have been the site of a meeting between George Washington and the Marquis de Lafayette in 1779. The name Apple Tree House is given to the home because of a former apple orchard and cider press that were located on the property. The house was purchased by the Quinn family and used as a funeral parlor for a number of years.

In 1996, the house was on Preservation New Jersey's 10 Most Endangered Historic Sites list. The city of Jersey City purchased the building in 1999 for $450,000 and has been working to improve the condition of the building. The New Jersey Historic Trust gave Jersey City a grant in 2006 for interior restoration and accessibility improvements. Jersey City plans to use the house as a museum. Interior renovations were completed in 2014.

An annual wreath-laying ceremony occurs at the house every President's Day that is hosted by the George Washington Society.