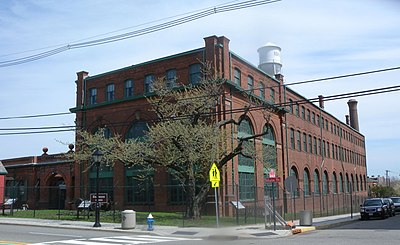 The park comprises two properties in West Orange: the second Edison Laboratories complex, and Edison's home in Llewelyn Park about .5 miles (0.80 km) to the west.

The laboratory complex comprises the industrial facility built by Edison in 1887 to research and develop his inventions. The complex includes more than a dozen buildings that supported Edison's research into electricity, photography, motion pictures, chemistry, metallurgy, chemistry and other disciplines. A private library was attached to the main laboratory building. Specialty heavy and precision machine shops made tooling and prototypes.

Edison's Queen Anne style home was designed by Henry Hudson Holly and built between 1880 and 1882 for Henry Pedder. It originally comprised 23 rooms. The mansion was built with gravity-convection central heat, indoor flush toilets, and hot and cold piped water. Pedder was found to have embezzled funds from his employer to build Glenmont, and was forced to surrender the estate, which Edison bought in 1886 for $125,000, moving in with his newly-married second wife Mina and his three children from his first marriage. The house retains its original furnishings in an Eastlake style interior. Edison added six more rooms, and electrical wiring.

In 1996, the alternative rock band They Might Be Giants recorded four songs on phonograph cylinder at the museum. One of these recordings, of the song "I Can Hear You", appeared on their album Factory Showroom released later the same year. The other three songs ("Maybe I Know", "The Edison Museum", and a re-recording of the Factory Showroom track "James K. Polk") were released on the band's website in 2002.