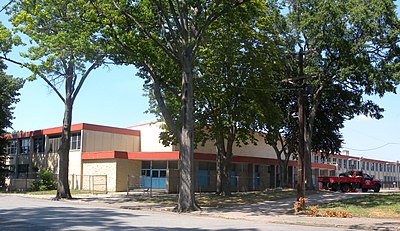 Barringer Academy of the Arts & Humanities (formerly Barringer High School and Newark High School), is a four-year comprehensive public high school serving students in ninth through twelfth grades in Newark, in Essex County, New Jersey, United States, operating as part of the Newark Public Schools. Some consider it to be the third oldest public high school in the United States. The school has been accredited by the Middle States Association of Colleges and Schools Commission on Elementary and Secondary Schools since 1981.

The school was the 327th-ranked public high school in New Jersey out of 339 schools statewide in New Jersey Monthly magazine's September 2014 cover story on the state's "Top Public High Schools", using a new ranking methodology. The school had been ranked 313th in the state of 328 schools in 2012, after being ranked 311th in 2010 out of 322 schools listed. The magazine ranked the school 306th in 2008 out of 316 schools. The school was ranked 303rd in the magazine's September 2006 issue, which surveyed 316 schools across the state.

In 1838, Nathan Hedges opened a high school in a building on Bank Street. On January 7, 1853, a three-story building was opened at the corner of Washington and Linden and had an enrollment of 498 boys and girls.

In 1875, Dr. William N. Barringer was hired to succeed George B. Sears as Superintendent of Schools. Dr. Barringer oversaw the construction of a second high school building at a cost of $300,000, which is the site of the current faculty parking lot. Construction started in 1878 and was completed in 1899. In 1907, the name of Newark High School was officially changed to Barringer, in honor of Dr. Barringer.

The Barringer High School Blue Bears compete in the Super Essex Conference, following a reorganization of sports leagues in Northern New Jersey by the New Jersey State Interscholastic Athletic Association. With 1,115 students in grades 10-12, the school was classified by the NJSIAA for the 2019–20 school year as Group IV for most athletic competition purposes, which included schools with an enrollment of 1,060 to 5,049 students in that grade range. Until the NJSIAA's 2009 realignment, the school had participated in Division B of the Northern New Jersey Interscholastic League, which was made up of high schools located in Bergen County, Essex County and Passaic County, and was separated into three divisions based on NJSIAA size classification. The school was classified by the NJSIAA as Group IV North for football for 2018–2020.

The boys track team won the spring track state championship in Group IV in 1933 and 1934.

The boys fencing team was the overall state co-champion in 1969 with Essex Catholic High School.

The 1975 football team finished the season with a 9–1–1 record after winning the North II Group IV state sectional title with a 14–13 victory against Livingston High School in the championship game played in front of a crowd of 7,500.