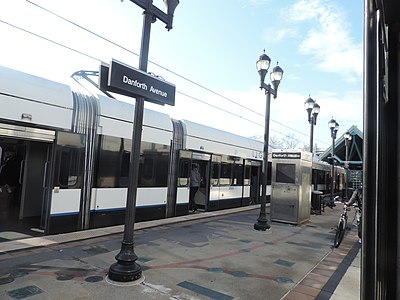 Danforth Avenue is a station on the Hudson–Bergen Light Rail (HBLR) in Jersey City, Hudson County, New Jersey. The station is located at the intersection of Danforth Avenue and Princeton Avenue in Greenville. It opened on April 17, 2000 as part of the original operating segment of the HBLR.

The station has a single island platform with a shelter for the local trains of the Hudson–Bergen Light Rail between 8th Street station in Bayonne and Hoboken Terminal. Like its counterparts, the Danforth Avenue station is fully accessible for handicapped people under the Americans with Disabilities Act of 1990, with elevators and proper platform levels.

During excavations for its construction workers came across what appear to be the petrified remains of luggage. The items were later incorporated in the design of a public art exhibition entitled Immigrant Remnants.

Danforth Avenue station is located north of the site of the former Central Railroad of New Jersey Greenville station. The former Greenville stop was located along the right of way at Linden Avenue, south of the current bridge over the railroad. The station opened on August 1, 1864 as part of a dummy railroad between the future Communipaw Terminal and Bergen Point until the CRRNJ Newark Bay Bridge was built across Newark Bay. A station built in 1866 at that location burned down on May 11, 1869 and replaced with a two-story wooden depot that was 21 by 51 feet (6.4 m × 15.5 m) large. The later station depot lasted until 1964, when it was razed in favor of a shelter. Passenger service to Greenville ended on April 30, 1967, when the Aldene Plan went into effect, moving CNJ commuter services through Newark Penn Station via the Lehigh Valley Railroad. Service through Bayonne was truncated from Communipaw Terminal to CNJ's East 33rd Street station.