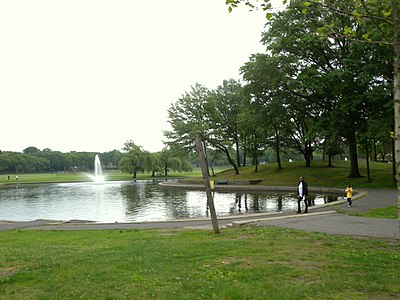 Lincoln Park is an urban park in Jersey City, New Jersey with an area of 273.4 acres (110.6 ha). Part of the Hudson County Park System, it opened in 1905 and was originally known as West Side Park. The park was designed by Daniel W. Langton and Charles N. Lowrie, both founding members of the American Society of Landscape Architects.

The park consists of two distinct sections: Lincoln Park East, 150.4 acres (60.9 ha), and Lincoln Park West, 123 acres (50 ha). The sections are named for their positions relative to U.S. Route 1/9 Truck, which passes between them, and are connected by foot and vehicular bridges over the highway. The Lincoln Park Nature Walk is part of wetlands restoration project adjacent to the Hackensack River. The Hackensack RiverWalk is a partially completed greenway along the banks of the river running the length of the Hudson County shoreline. The East Coast Greenway also traverses the park.

Lincoln Park was the first park in the Hudson County parks system. The Hudson County Parks Commission was created in 1903, and began work on the park in 1904. The park was built primarily on undeveloped swamp and the privately owned Glendale Woods. By 1925, 85 acres (34 ha) of land had been reclaimed from the Hackensack River in the western portion of the park. The park was expanded again in 1938 with the acquisition of additional properties along the Hackensack River. The Lincoln Park Nature Walk is part of 31-acre (130,000 m2) wetlands restoration project on a former landfill site adjacent to the Hackensack River unveiled in July 2011. It is hoped that the nearly $10.6 million development will enhance bird and fish populations. A section of the East Coast Greenway crosses through the park, which is site of one of five kiosks in the state for the project

The park was the home of the Jersey City Skeeters of the Eastern and International Leagues from 1904 until 1934, when the team relocated to Syracuse, New York.

Lincoln Park West consists primarily of wetlands as well as Joseph J. Jaroschak Field, the facility for the baseball, softball, and soccer teams of Saint Peter's University. This section formerly had batting cages and a driving range. In 2011, these were demolished and construction was begun on a nine-hole public golf course, the first public course in Hudson County. which opened in May 2015 after environmental restoration, grading, and landscaping.

Casino in the Park

Just south of the Lincoln Park Lake is Casino in the Park, a catering facility owned by the county and leased to a private operator. The original structure was built as a clubhouse for the tennis courts, but was underutilized due to the distance between them. It was used as a summer museum by the Jersey City Public Library before being leased to Ray Dillman, manager of the El Morocco nightclub in New York City, as a restaurant.

The restaurant is regularly used for meetings and events. Many well known people have attended private and public events at the venue. In 1963, Frank Sinatra attended his parents' 50th wedding anniversary celebration at Casino in the Park. In 1991, the Hudson County Democratic Organization was addressed by then Arkansas Governor Bill Clinton. It is also the location of weekly meetings of the Rotary Club of Jersey City.

The city leases the building to a private enterprise.

As of 2019, the building is slated for demolition and replacement.

Skeeters Park was a baseball field with bleachers and a grandstand with a seating capacity of 8,500 people, built in 1902. It was home to the Jersey City Skeeters, a minor league baseball team.

The primary piece of public art in the park is Lincoln the Mystic, a statue by James Earle Fraser commissioned in 1929 by the Lincoln Association of Jersey City. The sculpture was dedicated on June 14, 1930. 4,000 people attended the unveiling and the crowd was addressed by New Jersey Governor Morgan F. Larson.

The park is also home to the world's largest concrete monument, the 365-ton Lincoln Park Fountain designed by Pierre J. Cheron at the center of the park's traffic circle. The fountain is 53 feet (16 m) tall, and contains 27 frog-shaped spouts and 150 lights. The fountain was rededicated on June 16, 2016 after a $7.2 million restoration.