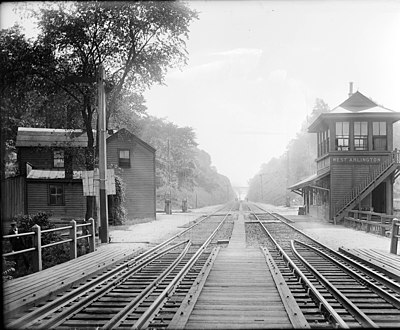 West Arlington station was a former railroad station in the Arlington section of Kearny in Hudson County, New Jersey. The station was used by the Erie Railroad along its New York & Greenwood Lake Railroad division. The second of two stations in Arlington, the station was located on North Midland Avenue, just off the intersection with County Route 699 (Passaic Avenue). Along with a passenger train portion, West Arlington station also held WR Tower, the interlocking tower to handle the nearby WR Draw swing bridge over the Passaic River. The station was first constructed in 1874, (and rebuilt in 1895) with a single story passenger train station and a double story WR Tower attached to the building.

The station saw its last passenger train on September 30, 1966, a train along the Caldwell Branch of the New York and Greenwood Lake, which ended the need for the old station half, although that was not torn out. The last Erie-Lackawanna Railway train to cross the nearby swing bridge and use WR Tower was in 1976, when the system was turned over to Conrail. In 1976, the old West Arlington station burned down and was not replaced. The Montclair Connection caused the alignment and the swing bridge to no longer be needed. Passenger service along the alignment ended on September 20, 2002.