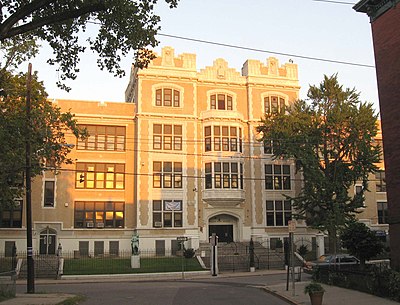 Lincoln High School Academy of Governance and Social Sciences (or simply Lincoln High School) is a four-year public high school located in Jersey City, in Hudson County, New Jersey, United States, operated as part of the Jersey City Public Schools, serving students in ninth through twelfth grade. The school has been accredited by the Middle States Association of Colleges and Schools Commission on Secondary Schools since 1928.

The school was the 328th-ranked public high school in New Jersey out of 339 schools statewide in New Jersey Monthly magazine's September 2014 cover story on the state's "Top Public High Schools", using a new ranking methodology. The school had been ranked 294th in the state of 328 schools in 2012, after being ranked 305th in 2010 out of 322 schools listed. The magazine ranked the school 291st in 2008 out of 316 schools. The school was ranked 279th in the magazine's September 2006 issue, which surveyed 316 schools across the state.

Schooldigger.com ranked the school 342nd out of 409 public high schools statewide in its 2014 rankings that were based on the combined percentage of students classified as proficient or above proficient on the language arts literacy and mathematics components of the High School Proficiency Assessment (HSPA).

The original Lincoln High School opened on September 9, 1912, with an inaugural student body of 300 on a site acquired from the Hasbrouck Institute, a private school. In January 1916, the school graduated its first class of 32 students. In 1934, the school had an enrollment of 5,000 students, making it the second largest in the state.

Lincoln is located at 60 Crescent Avenue south of Journal Square in Bergen Hill, on the site of a mansion that had been owned by George Theodore Werts, who served as Governor of New Jersey from 1893–1896.

Lincoln High School hosts a number of SLC programs that pertain to the interest of the students. For example, the magnet programs include Culinary Arts, Cosmetology, JROTC, Teaching, and Law and Legal Studies.

The Lincoln High School Lions compete in the Hudson County Interscholastic League, which includes private and parochial high schools in Hudson County. The league operates under the supervision of the New Jersey State Interscholastic Athletic Association (NJSIAA). With 682 students in grades 10–12, the school was classified by the NJSIAA for the 2015–16 school year as Central Jersey, Group II for most athletic competition purposes, which included schools with an enrollment of 498 to 756 students in that grade range. The school was classified by the NJSIAA as Group II South for football for 2018–2020.

Core members of the school's administration include: