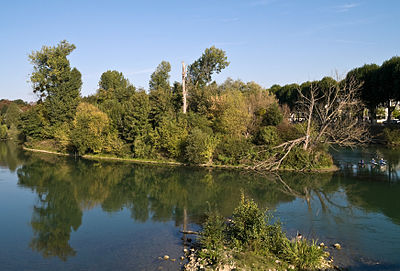 Chelles is a commune in the eastern suburbs of Paris, France. It is located in the Seine-et-Marne department in the Île-de-France region 18 km (11 mi) from the center of Paris.

Paleolithic artifacts were discovered by chance at Chelles by the pioneering nineteenth-century anthropologist Louis Laurent Gabriel de Mortillet (1821–1898); he named the corresponding cultural stage of the Paleolithic after the commune: «Chellean» or «Chellian», nowadays known as «Oldowan».

At the Merovingian villa of Calae the abbey of Notre-Dame-des-Chelles was founded by Balthild, a seventh-century queen of the Franks. It was largely demolished at the time of the French Revolution.

The inhabitants are called Chellois.

Chelles is served by Chelles – Gournay station on Paris RER line and on the Transilien Paris – Est suburban rail line .

As of 2016 the commune has 13,000 students in 46 public and private schools. The commune includes 19 public preschools and 16 public elementary schools.

The commune includes the Musée Alfred-Bonno.

There is also a public swimming pool, and a public skate park which opened in 1999.

Chelles is town twinned with the city of Lindau (Germany)