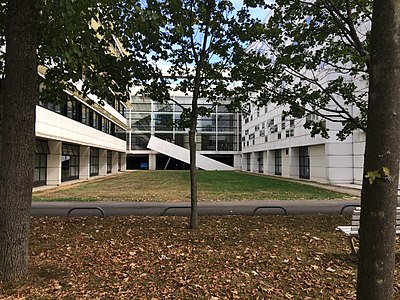 ESIEE Paris (French: École Supérieure d'Ingénieurs en Électrotechnique et Électronique) is a graduate school of engineering located in Marne-la-Vallée. The school was established in 1904 and is part of the ESIEE network of graduate schools.

ESIEE Paris offers its students general engineering training with the aim of enabling them to design, produce and oversee complex industrial systems while meeting strict economic constraints and dealing with an international environment. To accomplish this, the school renders advanced scientific and technological training, which is frequently updated to keep pace with changes in the leading edge technologies and supplemented by its association with language, general culture, economics and humanities teaching.

ESIEE Paris belongs to the Paris Île-de-France Regional Chamber of Commerce and Industry. The school is also a member of the Conférence des Grandes Écoles, and University of Paris-Est. The 'modernist' school building located at Marne-la-Vallée has been designed and conceived by the famed French architect Dominique Perrault.

It was founded in 1904 and was known until the 1960s as the Breguet school. Created in 1904, under the patronage of a family whose three generations contributed to the progress of electricity in the nineteenth century, their descendants accepted that the new school be called Breguet School. The school, from its inception, is intended to constitute in the field of science and technology of electricity, the equivalent of what had been for a long time, the National Schools of Arts and Crafts for mechanics, and delivers an engineering degree.

Recognized by the State by decree of January 3, 1922, the order of diploma is signed by the Minister of Supervision in 1926. Following the law of July 10, 1934, which specified the conditions of issue and the use of the title of qualified engineer, the Breguet School continues to appear on the list of establishments entitled to issue the title of engineer, after three years of consecutive studies at an entrance examination, aligned with the admission requirements of similar public schools.

At the very beginning, in 1904, it was not about electronics, let alone about computers and systems, but about electricity and mechanics. As the technical and technological evolution progressed, the School's teaching was adapted. Terrestrial television and radio courses appeared in the 30s and 40s and were replaced and strongly developed after the war under the general term of electronics. The scientific and technical education, supplemented by a broad general education allowed some 4 000 engineers from the 60 promotions, to adapt to all the circumstances of their professional life. Breguet is found in a wide range of industries, in its first place, obviously, in electrical or mechanical construction, electronics, aeronautics, but also in national services such as EDF, Public Works, Transport, etc.

In 1960, the Chamber of Commerce and Industry of Paris, anxious to add to its teaching work a training of engineers, chooses Breguet School, which develops from that time a wide collaboration company-school. The last class of engineers from École Breguet was released in 1965. In 1968, the School became known as École Supérieure d'Ingénieurs in Electrical Engineering and Electronics; however, the first engineers with the title of ESIEE engineers came out in 1966.

It is presently operated by the Paris Chamber of Commerce. Some of the students come directly from high school and graduate after five years while others, who follow the traditional path to the Grandes écoles, come from a preparatory classes and graduate in three years.

Approximately 400 of the 1,800 students in Paris graduate every year and 60% of them have spent at least three months studying or working outside France. Depending on their specialization, they can attend classes in its 650 m2 (7000 ft2) clean room. It is known as the first engineering school to have students design and launch an artificial satellite, named SARA, in 1991, as part of extracurricular work in ESIEESPACE, a student club. During the last two years, students choose a specialization among the following subjects:

ESIEE launched several masters of science programs in nano-science, MEMS, electronic engineering and system on a chip, programs to which international students and 4th and 5th-year ESIEE students may participate. [1] [2]

In addition to the European Erasmus Programme, two main exchange programs are offered to the students:

Hereafter is a list of some of the Universities where the students of ESIEE Paris have the opportunity to study:

Having had many industrial collaborations, with the likes of General Electric, Siemens or Sagem, as well as with high-tech startup companies, the joint work of the Department of Computer Science with Siemens research (Princeton) has been rewarded by three thesis prizes. The department has several research activities including Architecture and parallelism for image processing and virtual reality, Discrete geometry, computational geometry, Mathematical morphology and image processing, Optimisation, modelling and machine learning & Signal processing etc.

The research activity in this area is focused, primarily on the issues of sustainable cities and the well-being of the person. While considering the assortment of data that sensors can deliver, 'Examination Microsystems' is more intense than straightforward sensors. At the point when lessened to the 'Lab-on-chip' scaled down configuration, they turn out to be minimal effort and gain a critical place for supportable city instrumentation. The EquipEx ‘SenseCity' project is well-regarded in this context.