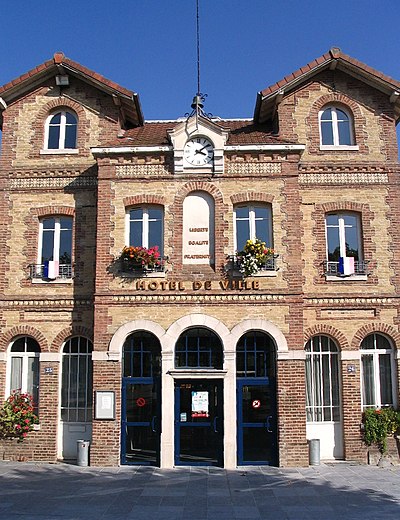 Noisiel is a commune in the Seine-et-Marne department in the Île-de-France region in north-central France. It is located in the eastern suburbs of Paris, 20.5 km (12.7 mi) from the center of Paris.

The commune of Noisiel is part of the Val Maubuée sector, one of the four sectors in the "new town" of Marne-la-Vallée.

In 2014, Noisiel had 15,523 inhabitants, a rise of 0.07% since 2009 (Seine-et-Marne : 4,68 % , France without Mayotte : 2,49 %). The evolution of the number of inhabitants is known through the population censuses carried out in the town since 1793. From the 21st century, the census for communes with more than 10,000 inhabitants takes place every year as a result of a sample survey, unlike the other communes which have a real census every five years.

As of 1998, 8% of the population was Asian and certain parts of the commune had high Asian populations.

Noisiel is served by Noisiel station on Paris RER line .

Noisiel is synonymous with the name "Menier", famous chocolate makers who built the first automated chocolate production facility in 1825 at a time when the village's inhabitants numbered around 200. The Menier company would prosper and in the 1870s built a complete "town" to accommodate its employees that numbered more than 2000 by the end of the 19th century.

Members of the Menier family were mayors of Noisiel without interruption from May 11, 1871 to November 8, 1959.

The Menier Chocolate factory operated until 1993 and today is a museum and the French head office of the Nestlé company who now own the company. It has been designated by the government of France as a Monument historique and is on the list to be named a UNESCO World Heritage Site [1]. It is open once a year to visitors during the Open Doors Days in September. The Noisiel heritage office [2] also offers several guided tours for visitors wishing to discover Noisiel and its history.