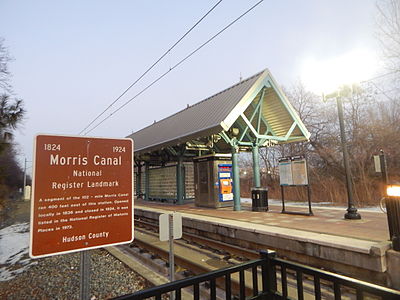 Richard Street station was built north of the site of a former Central Railroad of New Jersey station in the same area. Located at what is now the south end of Bayside Park, Van Nostrand Place station was a stop on the Main Line in Jersey City. Opened in 1887, later than most stations on the line, Van Nostrand Place had a smaller station compared to others, only at 15 by 27 feet (4.6 m × 8.2 m), and only a single story. The station agent at Van Nostrand Place was eliminated in 1952 and in 1958, they razed the single story depot, replacing it with two shelters (one in each direction). Passenger service to Van Nostrand Place ended on April 30, 1967, when the Aldene Plan went into effect, moving CNJ commuter services through Newark Penn Station via the Lehigh Valley Railroad. Service through Bayonne and Jersey City was truncated from Communipaw Terminal to East 33rd Street.

The station opened on April 17, 2000. It is located along the former Central Railroad of New Jersey right of way, which terminated at Communipaw Terminal. During excavations for its construction, workers came across what appear to be the petrified remains of luggage, which were also found at nearby Danforth Avenue stop.

On August 1, 2010, gunfire erupted at the station, sending a group of people running for cover as they were chased by a gunman on the platform. Police arrived at 10:32pm (EST). The gunman and the group were gone, but police recovered three spent bullet casings at the scene, and one bullet projectile at the base of the steps leading to the platform. One of the railings of the steps was struck by one of the bullets. A witness who had been walking about 50 feet behind the group on the platform stated he saw another man run past him and fire three or four shots into the group. No one was shot or injured. The gunman, was described as being in his late teens, 5-foot-8, wearing blue jeans and a black T-shirt.