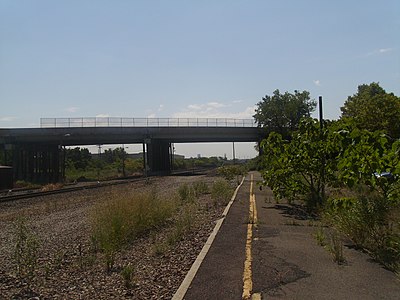 Harmon Cove is an abandoned train station in the Harmon Cove section of Secaucus, New Jersey. The station was a former stop on the Bergen County Line which runs from Hoboken Terminal to Suffern. Train service was discontinued in 2003 when Secaucus Junction was opened.

The station was built to serve the gated community known as Harmon Cove, which was developed in the 1970s with townhouses and highrise residential buildings. The station was built adjacent to the development at Meadowlands Parkway for $150,000, and opened on June 26, 1978. This station was, and still remains, the only privately financed and constructed rail station in New Jersey. This site of the then-new station was located on a section of the old Erie Main Line. It had a 100-car parking lot and could shelter 50 passengers. The station closed on August 4, 2003, in anticipation of the opening of Secaucus Junction station. To allow Bergen County Line and Pascack Valley Line trains to stop there, a curving track was built between the HX Draw bridge at the Hackensack River and the Main Line north of Secaucus Junction. Today, the platform still remains, albeit in derelict condition.

To replace train service, a bus shuttle was implemented, which ran between Harmon Cove and Secaucus Junction, thus connecting with Bergen County Line trains. This shuttle was operated by Academy Express and was labeled bus route 972. This route was replaced by NJ Transit bus route 129 on April 3, 2004.