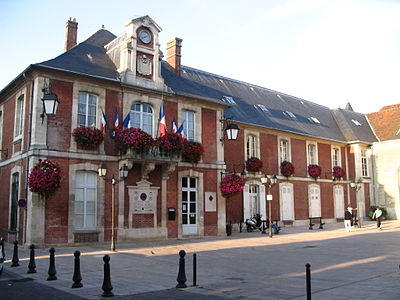 Lagny-sur-Marne (pronounced [laɲi syʁ maʁn]; English: Lagny on the Marne) is a commune in the eastern suburbs of Paris, France. It is located in the Seine-et-Marne department in the Île-de-France 26.1 km (16.2 mi) from the centre of Paris.

The commune of Lagny-sur-Marne is part of the Val de Bussy sector, one of the four sectors in the "new town" of Marne-la-Vallée.

From 644, Lagny-sur-Marne was the site of Lagny Abbey, a monastery founded that year, and after its destruction by the Normans refounded about 990. The monastery was seized by the state at the French Revolution and its buildings are used since 1842 as the offices of the municipality.

During the Middle Ages Lagny-sur-Marne was one of the most popular places for tourneys in Northern France. In November 1179 a notable tournament was held by Louis VII of France in honour of the coronation of his son.

In 1170, the young knight Baldwin of Bethune and his lifelong friend, William Marshal were at the court of Henry the Young King. In 1180 at the great international tournament of Lagny, Baldwin was a knight banneret, leading the Flemish team while William headed the English team.

In 1846, Lagny-sur-Marne annexed the commune of Saint-Denis-du-Port.

When Titus Interactive was active, its head office was in Lagny-sur-Marne.

Lagny-sur-Marne is served by the Lagny – Thorigny station, on the Transilien Paris – Est suburban rail line. The station, although administratively located in neighbouring commune of Thorigny-sur-Marne, is immediately across the Marne River from the centre of Lagny-sur-Marne.

Lagny-sur-Marne is twinned with Sainte-Agathe-des-Monts, Quebec in Canada since 1969, and also with Alnwick, Northumberland in England.