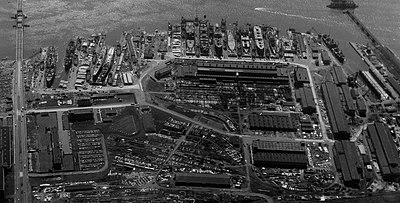 The Federal Shipbuilding and Drydock Company was a United States shipyard, active from 1917 to 1948. It was founded during World War I to build ships for the United States Shipping Board. During World War II, it built ships as part of the U.S. Government's Emergency Shipbuilding program. Operated by a subsidiary of the United States Steel Corporation, the shipyard was located at Kearny Point where the mouth of the Hackensack River meets Newark Bay in the Port of New York and New Jersey. The shipyard site is now part of River Terminal, a massive distribution facility that is partially a foreign trade zone.

Federal built numerous destroyers, destroyer escorts and a handful of light cruisers as well as merchant ships during and between the wars. Around 570 vessels were contracted for construction by Federal SB&DD Company with about 100 not delivered fully completed due to the end of the World War II. Federal also had a yard at Port Newark during World War II that built destroyers and landing craft.

History of the Federal Yard at Kearny

Federal Shipbuilding and Dry Dock Company was founded July 24, 1917 as a subsidiary of United States Steel Corporation to supply ships for the United States Shipping Board during World War I. The site on Kearny Point was first surveyed during the summer of 1917. The shipyard was to consist of everything needed to fully complete a ship from a facility power plant to a wood joining shop. A steel plate mill and boiler shop were to be built as well. $10 million ($200 million today) was allocated for construction. The American Bridge Company was contracted to provide 10,000 tons of steel for the structures. E.H. Gary was president of Federal in August 1917. The ship-ways were completed by the fall of 1917 with keels being laid by November 1917. Federal completed a 9,600 ton ship around six weeks before World War I ended as well as two other ships before the close of 1918. 27 ships were delivered to the Emergency Fleet Corporation in 1919. Federal accounted for 5% of the steel merchant tonnage built in 1919.

By November 1921, Federal had shipbuilding ways for twelve 15,000 ton vessels and had constructed a 9,000 ton floating dry dock. The dry dock was first used June 23, 1921 when Transmarine corp's SS Suhulco docked. The Kearny yard was 17 acres (6.9 ha) with 2,400 feet (730 m) of frontage on the Hackensack River. A wet basin was located at the southern end with a 100-ton 3-legged jib crane for fitting out new ships.

On Sunday night, May 18, 1924, a fire destroyed the largest building at the Kearny yard causing an initially estimated $500,000 in damage. Other estimates were $1.6 million or as high as several million dollars in damage. Firemen used four mobile cranes to try to extinguish fires in the pattern building and the plate shop. Over a thousand workers were idled by the fire. The shipyard had around 5,000 workers at the time and was said to be one of the largest steel fabrication plants in the world. Fireboats and numerous firemen from around the area were called in to fight the fire which spread rapidly through the wooden structures at the Kearny yard.

The Federal yard at Kearny remained operational during the difficult interwar period and Great Depression. Federal built commercial ships, tankers, barges and car floats for companies like Grace Line, Standard Oil of New Jersey and various railroads. Federal also was able to get contracts for two Mahan-class destroyers in the mid-1930s followed by a few Somers-class destroyers and Benham-class destroyers in the late-1930s lead up to World War II.

Federal made national news when around 16,000 workers went on strike at Kearny from August 7 to August 25, 1941. Work was stopped on $493 million ($8.57 billion today) in Navy and merchant shipbuilding contracts as the nation ramped up ship construction before entering World War II. The strike was ended when President Franklin D. Roosevelt ordered the Navy to seize control of the facility. The final sticking point in negotiations had been the refusal of management at Federal to accept demands to require a "maintenance of membership" clause which would effectively make the shipyard a closed shop. Company president Lynn H. Korndorff offered the shipyard to the Navy rather than accept the demands to become a closed shop.

When the Navy took over, the yard fell under the supervision of Rear Admiral Harold G. Bowen Sr. as Officer-in-charge. It was the first take over of an industrial plant by the Navy in that era. While the union was enthusiastic about the seizure, they did not get the response they were expecting when the Navy took control. According to Rear Admiral Bowen in his autobiography, while he was cordial with labor, he refused to acknowledge any union's right to collectively bargain for the workers at Kearny. He also refused to take steps to implement the "maintenance of membership" issue. By November 1941, the "maintenance of membership" clause was still not being enforced and the union sought relief from the Defense Mediation Board.

After 134 days of operation by the Navy, control of the shipyard was returned to the company on January 6, 1942. Under Navy control the shipyard laid 12 keels, launched 10 and commissioned 7 ships. Secretary of the Navy Frank Knox returned the shipyard and asked that the company and union work out the remaining issue. Failing that, the two parties would use newly established national machinery to resolve the dispute. The "maintenance of membership" issue had still not been resolved. In May 1942, Federal finally gave in to demands to require membership in the CIO Industrial Union of Marine and Shipbuilding Workers. Company president Lynn H. Korndorff said Federal only complied with the order of the National War Labor Board because of the war emergency. The incident was viewed as one of the first major tests of the NWLB.

According to John T. Cunningham in "Made in New Jersey," Federal "completely proved its might". On one day alone in May 1942, the company launched four destroyers in a 50-minute period. By 1943, Federal Shipbuilding was employing 52,000 people and building ships faster than any other yard in the world."

Federal continued to set company construction speed records throughout the war. In July 1943, Federal claimed records of 170 days from keel to commissioning on the large destroyer USS Dashiell (DD-659) and 137 days on light destroyer USS Thorn (DD-647). Federal also said Type C2 ships were being built in an average time of 82 days. In July 1943, destroyer escorts were being launched about once a week since spring of 1943. Between the Newark and Kearny yards, Federal launched a company record of 11 ships in 29 days during March 1943.

On April 23, 1948, Lynn H. Korndorff, the President of Federal Shipbuilding and Drydock Company announced that the US Navy had agreed to purchase facilities at Kearny for around $2,375,000 ($25.3 million today), its depreciated book value. The Navy planned to hold the facility in a standby state for potential emergency reactivation. The New York Times regarded this sale price to be "astounding low". In July 1948, Federal's large floating dry dock was towed 1,700 miles in 19 days to Gulf Shipbuilding Corporation's Chickasaw, Alabama shipyard, which had been constructed during World War I by U.S. Steel, parent of Federal SB&DD.

Around 465 ships were delivered by Federal SB&DD Company out of its 569 hull numbers allocated. 325 were delivered from the Kearny yard and 140 from Port Newark.

Instead of building ships, the site eventually hosted a salvaging operation where numerous ships were scrapped. In 1975, the former Federal yard was described as one of the nation's largest ship-breaking yards. According to the 1975 head of the River Terminal Development Corp, the first ship to be scrapped at the yard was USS Enterprise (CV-6) in 1959. Other carriers scrapped there included Essex, Randolph, Boxer, Wasp and Antietam. Battleships, battle cruisers, cruisers and submarines had also been scrapped at the former Federal yard as of the mid-1970s. Texas Tower 3 was also scrapped at the Federal yard by Lipsett Corp.

In January 1942, Federal Shipbuilding and Drydock Company announced they were expanding their facilities to increase capacity and employ an additional 10,000 workers. They expanded to the site of the former Submarine Boat Corporation at Port Newark. After nine months of construction to rebuild the facility, the first ships were launched at the Port Newark yard on October 10, 1942. All of the Gearing-class destroyers built at Federal were built at the Newark yard. The Port Newark yard closed after the war and the site gained some notoriety in late 1947 during a dispute over the scrapping of the battleship New Mexico and two others by Lipsett Corp. The site was an automobile terminal parking lot in the 2010s.