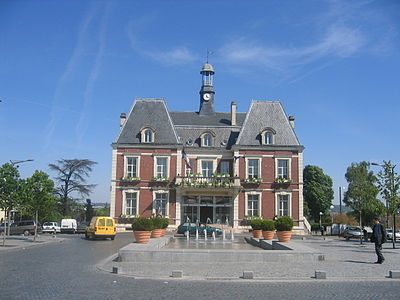 Noisy-le-Grand (French pronunciation: [nwazi lə ɡʁɑ̃] (listen)) is a commune in the eastern suburbs of Paris, France. It is located 15.2 km (9.4 mi) from the centre of Paris. The commune of Noisy-le-Grand is part of the sector of Porte de Paris, one of the four sectors of the "new town" of Marne-la-Vallée.

Some of the postmodern architecture in the commune has been used as a shooting location in movies including Brazil and The Hunger Games.

The epithet "le-Grand" (Medieval Latin: Magnum), meaning "the Great", was added in the Middle Ages, probably to distinguish Noisy-le-Grand from the smaller settlement of Noisy-le-Sec, which was sometimes referred to as Nucenum Minus ("Noisy the Small").

Like a lot of other Seine-Saint-Denis cities, the commune is very cosmopolitan, home of many communities, with a lot of its locals coming from various continents and countries. It has a large African population, mostly from sub-Saharan countries (Senegal, Mali, Ivory Coast and many others) and East Asian countries, such as China, Vietnam and Cambodia. The city also includes significant, but less numerous, communities from Portugal and North African countries like Morocco and Algeria. Recently, the department, and the Parisian suburbs in general, has seen a new wave of immigration coming from Eastern Europe. Noisy-le-Grand now has communities from former Eastern Bloc countries like Romania, Bulgaria and Russia.

As of 1998 there were 2,700 East Asians in Noisy le Grand, making up about 5-6% of the city; many of them lived in the same complexes occupied by Africans and other foreigners, and Asians were widely distributed around the commune.

The commune has municipal preschools and elementary schools.