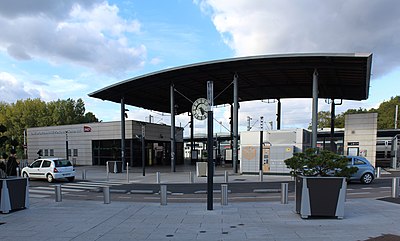 Émerainville–Pontault-Combault is a French railway station on the Paris-Est–Mulhouse-Ville railway, located in Émerainville, Seine-et-Marne département, Ile-de-France region. It bears the name of Pontault-Combault commune as its territory reaches the south and the west of the building. It serves a district of Marne-la-Vallée.

The station is put into service on February 9, 1857, by the Compagnie des chemins de fer de l'Est, when the section from Nogent–Le Perreux to Nangis opens. It is a SNCF station served by RER line E trains.

The Est company puts in operation Émerainville station at the opening of the section from Nogent–Le Perreux to Nangis to commercial service. That section opens with only one track, the second is put into service on April 23, 1857.

In 2000, a contract between the state and the Ile-de-France region organizes the expansion of the RER E from Villiers-sur-Marne to Tournan. On February 14, 2002, the STIF board of directors approves of the pilot. On December 14, 2003, the line is cut from its historical network to Paris Est, and linked with RER E leading to Haussmann–Saint Lazare underground station. That integration modify journeys and timetables, and improves the station services. Platforms are raised from 0.55 meters (1.80 ft) to 0.92 meters (3.02 ft) to facilitate access to the carriages. Facilities improve accessibility to people with limited mobility. Screens on the platforms show real time information.

Branch to Menier factory in Noisiel

From 1883 to 1959, the station was the start of a private standard gauge railway serving Menier chocolate factory in Noisiel. It measured 10 km, including a 1.6 km section inside the factory. It included a branch serving La Ferme du Buisson cultural center. It was fully in the Menier family domain and included five railroad crossings.

Menier branch was then refurbished with a marshalling yard in Émerainville and an extension to the west, with a unique track, along A4 autoroute and rounding Lognes–Émerainville aerodrome, then heading to Pariest industrial park in Lognes. That is a 7.5 km track serving Seita and SEVM companies, carrying 118000 tons of freight a year. The line is disused in 2005 as the two companies move and the line manager refuse to pay for the maintenance.

As a Transilien network station, commercial services are available everyday, as well as facilities and assistance to people with limited mobility. The station is equipped with vending machines for Transilien and main lines tickets, and with real time traffic information system. Several facilities are present, such as a press booth and a vending machine proposing drinks and sweets.

The station is served in both directions by one train every 30 minutes off-peak and in the evening. It is served by two to four trains an hour during peak times.

Several car parks are set nearby.

The station is also served by bus companies: