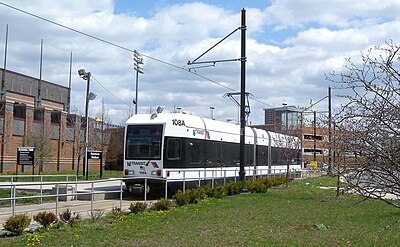 Riverfront Stadium is a light rail station on the Newark Light Rail's Broad Street Extension. Service on this line opened on July 17, 2006 at 1:00 p.m. EDT. Located on a private right-of-way along Atlantic Street near the intersection of Broad Street, it is only served by Newark Broad Street-bound trains.

Located in the Washington Park section of Downtown Newark, New Jersey, the station is an above ground stop in front of Gate C at the Bears & Eagles Riverfront Stadium. It has a single side platform (part of the sidewalk to the stadium's entrance) and one track. A metal fence separates the track opposite the platform from the grass on the other side.

The station does not have any ticket vending machines or validators (so the short ride to Newark Broad Street is free), canopies, or shelters. A pedestrian walkway is just to the north. There are four signs, two standard name nights, and two others that inform passengers to board at Newark-Broad Street or Washington Park for service to Newark Penn Station and purchase and validate tickets before boarding. The platforms have some lights that are silver with square tops.

The stadium itself was demolished in late 2019.