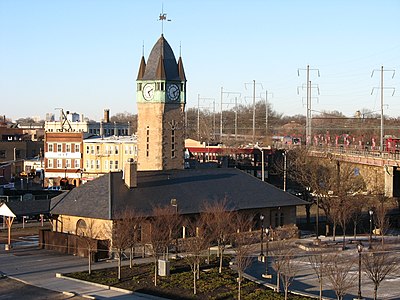 Elizabeth is a disused train station in Elizabeth, New Jersey. It was built by the Central Railroad of New Jersey (CNJ) in 1893. It is adjacent to NJ Transit's Elizabeth station on the Northeast Corridor. That station was built and owned by the Pennsylvania Railroad; in the era of private operation passengers could transfer between the two. The CNJ right-of-way in Elizabeth is unused, and passenger trains which served the former CNJ mainline (NJT's Raritan Valley Line service) bypass Elizabeth via the Aldene Connection on their way to Newark Penn Station. The station has been renovated and used as commercial space.

The station was on the CNJ's main line and was also used B&O and Reading Railway trains which terminated the CNJ's Jersey City terminal, where ferry service to New York was available.

The CNJ station suffered from a freight train wreck on November 4, 1972, when a boxcar derailed and pulled several other cars into the canopy. Although the buildings and freight cars were damaged, there were no injuries. The station has been listed in the New Jersey Register of Historic Places and National Register of Historic Places since 1984 and is part of the Operating Passenger Railroad Stations Thematic Resource.

There are plans to redesign the public space and create a transit plaza between the CNJ and NJT stations. Funding was approved in 2018.

The proposed Union County Light Rail, which would have connected midtown Elizabeth with Newark Airport, would have had its western terminus at this station. The station for this line would have been referred to as Midtown to distinguish from the other stations in Elizabeth on this line. The plan has been replaced by the Union go bus expressway, a proposed bus rapid transit system between Garwood and the airport.