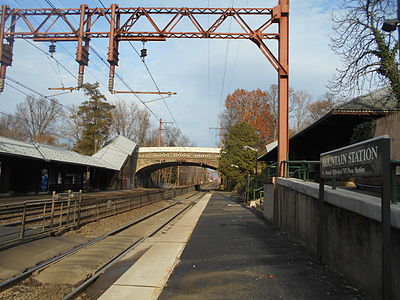 The station is somewhat unusual in that when the Lackawanna Railroad rebuilt the Morristown Line during the 1910s and 1920s, to eliminate grade crossings between Newark and Millburn, Mountain Station was the only location at which the elevation of the railroad's roadbed was not changed. As a result, the grade crossing of Montrose Avenue at the eastbound end of the station was eliminated and the roadway was raised onto a bridge. At the westbound end of the station, the Mountain House Road crossing was eliminated entirely and a pedestrian walkway was built. The walkway was removed during the late 1970s as part of the re-electrification project for the line.

At present, as in the past, most trains that stop here proceed onto, or have originated in, Hoboken. Most Midtown Direct trains into New York City bypass Mountain Station, but a large number do stop at the main station in South Orange, which is less than a mile to the south (timetable west). Midtown Direct trains can be accessed from Mountain Station by transferring at an intermediate station.