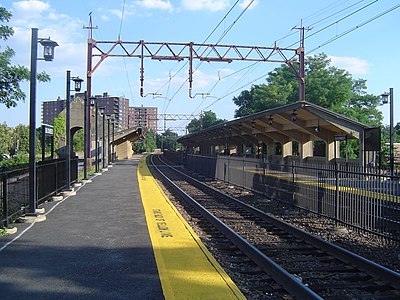 The current Glen Ridge, Bloomfield and Watsessing Avenue stations along the Montclair Branch were all built in 1912 during a grade separation program by the Delaware, Lackawanna and Western Railroad. Bloomfield Station has been on the New Jersey Register of Historic Places since March 17, 1984 and the National Register of Historic Places since June 22, 1984 and as part of the Operating Passenger Railroad Stations Thematic Resource.

The station is the centerpiece of a plan to revitalize Bloomfield's central business district which has been designated a transit-oriented development (TOD) transit village. The former headhouse is privately owned but has not been redeveloped. In 2011, the owner announced they would sell the building, enabling the town to influence future plans.

Bloomfield station is the terminus of the go bus 28, one of the first lines to use bus rapid transit in New Jersey, making limited stops through Newark to Newark Liberty International Airport.

The station has two ticket machines on the eastbound platform (to Newark and New York). The low-level side platforms are not accessible.