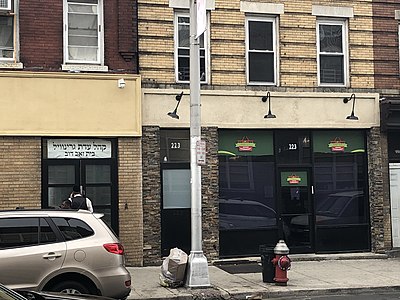 On December 10, 2019, a shooting was perpetrated at a kosher grocery store located in the Greenville section of Jersey City, New Jersey, in the United States. Five people were killed at the store, including the two assailants and three civilians whom they attacked. Additionally, the assailants wounded one civilian and two police officers. A Jersey City Police Department detective was shot and killed by the assailants at a nearby cemetery just before the grocery store attack. New Jersey Attorney General Gurbir Grewal stated that evidence indicated the attacks were acts of hate and domestic terrorism fueled both by anti-Semitism and anti-law enforcement beliefs.

On December 10, 2019, a police detective, who was meeting an informant, came across the assailants at the Bayview Cemetery in Jersey City, New Jersey in what was described as a chance encounter. It is believed that he approached the suspects, who were in a stolen U-Haul van that was linked to a murder the previous weekend of 34-year-old Jersey City resident Michael Rumberger in nearby Bayonne, New Jersey. The assailants shot and killed the officer. His body was discovered by a bystander and reported at 12:38 p.m.

The suspects then fled in the stolen van and drove about one mile to a kosher grocery store, the JC Kosher Supermarket in the Greenville section of Jersey City, and opened fire upon exiting the vehicle. At approximately 12:21 p.m., while wearing tactical gear they entered the store and fatally shot an owner, a worker, and a customer. Two other customers were able to escape. In the ensuing shootout, the assailants exchanged gunfire with the police for over an hour until they were shot and killed. A BearCat armored personnel carrier rammed through the storefront, ending the siege.

The van was later found to contain a live pipe bomb that had the capacity to kill or injure people up to 500 yards away.

Two officers, one male and one female, were wounded in the shootout and were released from the hospital the same day. A wounded man escaped out the back door of the store. He was treated at Jersey City Medical Center, and released on the same day.

On December 11, the shooters, both of whom were killed by police during the siege, were identified as David Nathaniel Anderson (age 47) and his girlfriend Francine Graham (age 50). Both were African-American.

Anderson and Graham were suspects in the murder of Uber driver Michael Rumberger in Bayonne the weekend prior to the attack. Rumberger's blood was found on a bible that belonged to the assailants, and his DNA was on their clothes and one weapon. Anderson and Graham had Googled the meaning of the surname "Rumberger".

Anderson and Graham were also suspects in an incident a week before the Jersey City shooting, when on December 3 two shots were fired at a vehicle driven by a person clearly identifiable as being Jewish, on U.S. Route 1/9 near Newark and Elizabeth, New Jersey. The vehicle's rear window was shot out. Graham’s phone was in the area at the time of the shooting, and the ballistics matched a gun linked to the two assailants, it was later determined.

Anderson had made posts on social media that were anti-police and anti-Semitic. His language was linked to that used by the Black Hebrew Israelite movement, which has no connection to mainstream Judaism, the extremist fringe of which includes numerous hate groups listed by the Southern Poverty Law Center. Anderson and Graham bought a number of weapons, and trained to use them in Ohio. Before they engaged in the Jersey City attack, they researched another possible attack on a Jewish community center in Bayonne.

Mayor of Jersey City Steven Fulop, referring to the market, tweeted that the shooters "targeted the location they attacked". He later referred to the attack as a hate crime. Mayor of New York Bill de Blasio called the attack a “premeditated violent antisemitic hate crime” and an “act of terror.” New Jersey Attorney General Gurbir Grewal stated that evidence indicated acts of hate and domestic terrorism fuelled both by anti-Semitism and anti-law enforcement beliefs.

Media reported that a handwritten note, which authorities call "manifesto-style', found inside the van said “I do this because my creator makes me do this and I hate who he hates.”

The Jersey City Medical Center, 12 Jersey City Public Schools in the vicinity as well as that of Sacred Heart Church, located across the street, were on lock-down during the incident. That school was taken over by law-enforcement agencies and used during the incident. Between 50-60 children were held in the yeshiva of Khal Adas Greenville next to the market. Public transportation on NJ Transit buses and the Hudson Bergen Light Rail in the area were suspended. The New Jersey Turnpike Newark Bay Extension was temporarily closed.

President Donald Trump was briefed about the incident at the White House. He gave his condolences to the victims and their families via a tweet. Governor of New Jersey Phil Murphy expressed his condolences, his thoughts and prayers for police, residents, and school children, and praise for the slain detective in a series of tweets. Cory Booker, junior United States Senator from New Jersey, and Mayor Fulop also expressed their condolences.

On December 12, 2019, US Representative Rashida Tlaib released a tweet on her personal account blaming the attack on white supremacy, which was later deleted.

Mayor Fulop said a trustee of the Jersey City Board of Education, Joan Terrell-Paige, should resign due to a Facebook message she posted after the shooting, in which she said black residents were "threatened, intimidated and harassed" by "brutes of the jewish community" (sic). She made reference to accusations of rabbis selling body parts. Terrell-Paige, who is African American, further asked whether the public is "brave enough" to listen to the perpetrators' message. Governor Murphy concurred in asking Terrell-Paige to resign; she said she is unrepentant. The Anti-Defamation League asked Terrell-Paige to resign citing her "lack of remorse". Her Facebook post is characterized by some as being antisemitic although one person called Terrell-Paige the "Rosa Parks of this era".

Fulop said that analysis of the assailants' computers showed that they likely intended to do more harm, that the yeshiva was the probable target of the attack, and that they "moved more quickly" with their plans because of their encounter with Detective Seals.

In January 2020 Jared Maples, director of the New Jersey Office of Homeland Security and Preparedness, said it was investigating possible funding sources for the attack, but with many lone wolf attacks they "do not need large amounts of funding to conduct their operations, making it difficult to detect and prevent attacks. The most common tactics in domestic extremist attacks include easily obtainable weapons, such as knives, small arms, and vehicles."

The market was re-opened by its owner at a nearby location in March 2020.