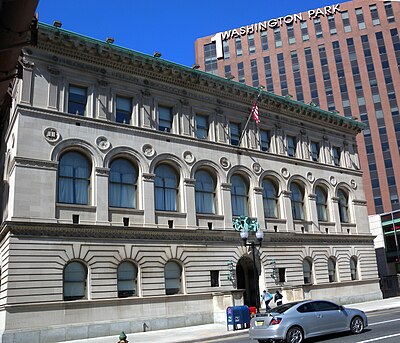 The historic Newark Public Library traces its beginnings to the Newark Library Association, a private organization that was chartered in 1847. In 1887, the people of Newark approved the founding of a Free Public Library. The first director of the library was Frank Pierce Hill.

The Newark 'Free Public Library opened on West Park Street in the central ward of downtown Newark in 1889 and offered a collection of over 10,000 books which had been acquired from the Newark Library Association.

Over time, the influx of more books and an increasing population necessitated the construction of a new building at 5 Washington Street, the current location of the main branch of the Newark Public Library. An architectural marvel, the new building, designed by Rankin and Kellogg, was influenced by the 15th century Palazzo Strozzi in Florence, Italy. The library also served as a museum, lecture hall, and a gallery.

After the death of Dana in 1929, the library continued to thrive. Beatrice Winser took over as director of the library and Newark Museum until 1942. In 1930, the library had a book truck which brought books to children throughout Newark. In 1939, the library's New Jersey Collection was founded (now the Charles F. Cummings New Jersey Information Center).

In 1989, the library opened what is now the James Brown African American Room to "generate and maintain an appreciation of African American history and culture". Also in 1989, La Sala was established with the "largest collection of Spanish–language library resources in New Jersey.

In 2018, the library launched a digital collection at http://digital.npl.org.

The four–story Italian Renaissance-inspired Main Library building was designed by John Hall Rankin and Thomas M. Kellogg, drawing inspiration from the 15th century Palazzo Strozzi in Florence, Italy. Their intentions were to have the building not only serve as a library, but also as a museum, lecture hall, and gallery, that would provide cultural, as well as educational experiences in an aesthetically pleasing environment. The building structure includes an open center court/foyer with arches and mosaics that extended upward to a stained glass ceiling four stories high.

On February 2, 2017 the library announced the appointment of a new library director, Jeffrey Trzeciak. Mr. Trzeciak began his role as Library Director on February 27, 2017.

The Main Library has been renovated many times since its founding. In 1922 and 1931 additions was completed. In 1927, a mural was painted on the 2nd floor - The Fountain of Knowledge - this mural still exists today. In 1949 a 10,000 square foot maintenance building was added.

In 1952, a $1,500,000 renovation project modernized the building including covering the 2nd floor mural. From 1987-1888 another renovation took place—restoring the mural.

In 2006, renovations were carried out in the lobby, including new front doors. In 2010-2011 projects included new carpeting and painting.

In 2016, author Philip Roth donated his book collection to the library. The library plans to renovate a room near Centennial Hall to house this collection.

After being selected by the Association of American College & Universities (AAC&U) to partake in the implementation of a Truth, Racial Healing, and Transformation (TRHT) campus centers, Rutgers University-Newark partnered with the Newark Public Library to aid in the development of the program. The AAC&U selected 10 universities to implement these programs and provided each a grant of $30,000. The goal is to bring to light the issues regarding racial inequality in diverse cities like Newark. Though selected in August 2017, the programs began on January 17th, 2017 at the Newark Public Library and include events that addressed DACA and the Charlottesville Riots and used spoken word poetry and art as mediums.