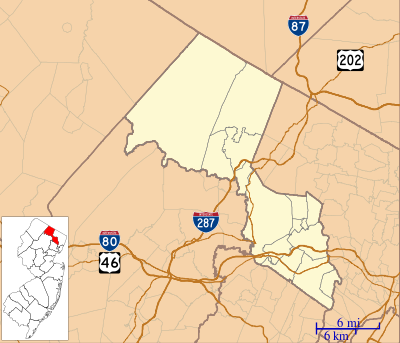 Passaic High School is a four-year community public high school, serving students in ninth through twelfth grades from Passaic, in Passaic County, New Jersey, United States, operating as part of the Passaic City School District. The school has been accredited by the Middle States Association of Colleges and Schools Commission on Secondary Schools since 1927.

The school was the 317th-ranked public high school in New Jersey out of 339 schools statewide in New Jersey Monthly magazine's September 2014 cover story on the state's "Top Public High Schools", using a new ranking methodology. The school had been ranked 282nd in the state of 328 schools in 2012, after being ranked 313th in 2010 out of 322 schools listed. The magazine ranked the school 312th in 2008 out of 316 schools. The school was ranked 310th in the magazine's September 2006 issue, which surveyed 316 schools across the state.

Passaic High School's first graduating class, in 1873, was made up of eight students, who attended the Acquackanonk District School. The first Passaic High School was constructed in 1886–87 at the corner of Lafayette Avenue and Bloomfield Avenue (now Broadway). The district's second high school was built in 1910 across the street from the original building on Lafayette Avenue. The present high school on Paulison Avenue was completed in May 1957.

The Passaic High School Indians compete in the Big North Conference, following a reorganization of sports leagues in Northern New Jersey by the New Jersey State Interscholastic Athletic Association. With 2,256 students in grades 10–12, the school was classified by the NJSIAA for the 2015–16 school year as North I, Group IV for most athletic competition purposes, which included schools with an enrollment of 1,090 to 2,568 students in that grade range. For the 2009–10 school year, the school was part of the North Jersey Tri-County Conference, a conference established on an interim basis to facilitate the realignment. Prior to the realignment in 2009, the school competed in Division B of the Northern New Jersey Interscholastic League (NNJIL) which included public and private high schools located in Bergen County and Passaic County.

Between 1915 and 1924, Ernest Blood coached the school's basketball team to a 200–1 record. Passaic was unbeaten for 159 games over more than five seasons, a feat which is considered to be the longest winning streak in basketball history.

Passaic High School hosts one of the largest Navy Junior Reserve Officers' Training Corps (NJROTC) programs in the country. In 2004 the unit was awarded the Navy's Unit Achievement award, and in both the 2005-2006 and 2006-2007 school years was recognized with the Distinguished Unit Award. Also in 2006 and 2007, under the command of Chelsea Woodson, the unit's Color Guard drill team won First Place at the National JROTC Championship in Daytona Beach, Florida. Also in 2007 at the National Drill Championship in Daytona Florida Senior Yasser Acosta earned a Fourth Place trophy for Platoon Armed. In 2008, the unarmed exhibition team under the command of Senior, Anthony Palma, came in a strong fourth-place finish on a national level in Daytona Beach, Florida. This second only to Karla Ramos 4th-place trophy earned in 2004.

Core members of the school's administration are: