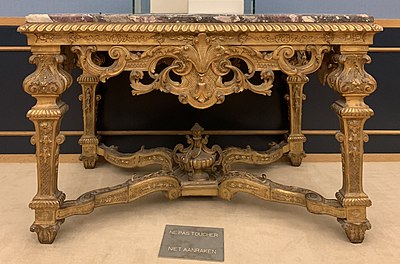 A table is an item of furniture with a raised flat top and is supported most commonly by 1 or 4 legs (although some can have more), used as a surface for working at, eating from or on which to place things. Some common types of table are the dining room table, which is used for seated persons to eat meals; the coffee table, which is a low table used in living rooms to display items or serve refreshments; and the bedside table, which is commonly used to place an alarm clock and a lamp. There are also a range of specialized types of tables, such as drafting tables, used for doing architectural drawings, and sewing tables.

The word table is derived from Old English tabele, derived from the Latin word tabula ('a board, plank, flat top piece'), which replaced the Old English bord; its current spelling reflects the influence of the French table.

Some very early tables were made and used by the Ancient Egyptians around 2500 BC, using wood and alabaster. They were often little more than stone platforms used to keep objects off the floor, though a few examples of wooden tables have been found in tombs. Food and drinks were usually put on large plates deposed on a pedestal for eating. The Egyptians made use of various small tables and elevated playing boards. The Chinese also created very early tables in order to pursue the arts of writing and painting, as did people in Mesopotamia, where various metals were used.

The Greeks and Romans made more frequent use of tables, notably for eating, although Greek tables were pushed under a bed after use. The Greeks invented a piece of furniture very similar to the guéridon. Tables were made of marble or wood and metal (typically bronze or silver alloys), sometimes with richly ornate legs. Later, the larger rectangular tables were made of separate platforms and pillars. The Romans also introduced a large, semicircular table to Italy, the mensa lunata. Plutarch mentions use of "tables" by Persians.

Furniture during the Middle Ages is not as well known as that of earlier or later periods, and most sources show the types used by the nobility. In the Eastern Roman Empire, tables were made of metal or wood, usually with four feet and frequently linked by x-shaped stretchers. Tables for eating were large and often round or semicircular. A combination of a small round table and a lectern seemed very popular as a writing table. In western Europe, the invasions and internecine wars caused most of the knowledge inherited from the classical era to be lost. As a result of the necessary movability, most tables were simple trestle tables, although small round tables made from joinery reappeared during the 15th century and onward. In the Gothic era, the chest became widespread and was often used as a table.

Refectory tables first appeared at least as early as the 17th century, as an advancement of the trestle table; these tables were typically quite long and wide and capable of supporting a sizeable banquet in the great hall or other reception room of a castle.

Tables come in a wide variety of materials, shapes, and heights dependent upon their origin, style, intended use and cost. Many tables are made of wood or wood-based products; some are made of other materials including metal and glass. Most tables are composed of a flat surface and one or more supports (legs). A table with a single, central foot is a pedestal table. Long tables often have extra legs for support.

Table tops can be in virtually any shape, although rectangular, square, round (e.g. the round table), and oval tops are the most frequent. Others have higher surfaces for personal use while either standing or sitting on a tall stool.

Many tables have tops that can be adjusted to change their height, position, shape, or size, either with foldable, sliding or extensions parts that can alter the shape of the top. Some tables are entirely foldable for easy transportation, e.g. camping or storage, e.g., TV trays. Small tables in trains and aircraft may be fixed or foldable, although they are sometimes considered as simply convenient shelves rather than tables.

Tables can be freestanding or designed for placement against a wall. Tables designed to be placed against a wall are known as Pier tables or console tables (French: console, "support bracket") and may be bracket-mounted (traditionally), like a shelf, or have legs, which sometimes imitate the look of a bracket-mounted table.

Tables of various shapes, heights, and sizes are designed for specific uses:

Historically, various types of tables have been popular for other uses: