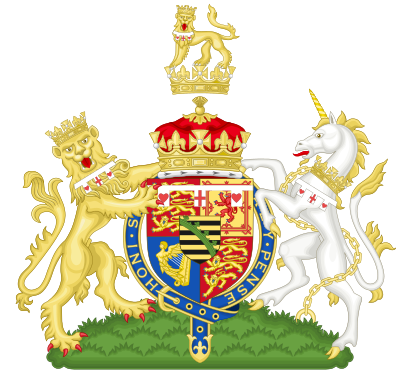 Duke of Albany is a peerage title that has occasionally been bestowed on the younger sons in the Scottish and later the British royal family, particularly in the Houses of Stuart and Hanover.

The Dukedom of Albany was first granted in 1398 by King Robert III of Scotland on his brother, Robert Stewart, the title being in the Peerage of Scotland. "Albany" was a broad territorial term representing the parts of Scotland north of the River Forth, roughly the former Kingdom of the Picts. The title (along with the Dukedom of Rothesay) was the first Dukedom created in Scotland. It passed to Robert's son Murdoch Stewart, and was forfeited in 1425 due to the attainder of Murdoch.

The title was again created in 1458 for Alexander Stewart but was forfeit in 1483. His son John Stewart was restored to the second creation in 1515 but died without heirs in 1536. In 1541 Robert, second son of James V of Scotland, was styled Duke of Albany, but he died at less than a month old. The fourth creation, along with the Earldom of Ross and Lordship of Ardmannoch, was for Mary, Queen of Scots' king consort Lord Darnley, whose son, later James VI of Scotland, I of England and Ireland, inherited the titles on his death. That creation merged with the Scottish crown upon James's ascension. The title, along with the title of Duke of York, with which it has since been traditionally coupled, was created for a fifth time in 1604 for Charles, son of James VI and I. Upon Charles's ascent to the throne in 1625, the title of Duke of Albany merged once again in the crowns.

The title was next granted in 1660 to Charles I's son, James, by Charles II. When James succeeded his elder brother to the throne in 1685, the titles again merged into the crown. The cities of New York and Albany, New York, were thus both named after James, as he was the Duke of York and of Albany. The pretender, Charles Edward Stuart, gave the title Duchess of Albany to his illegitimate daughter Charlotte; she died in 1789.

The title "Duke of York and Albany" was granted three times by the Hanoverian kings.

The title of "Albany" alone was granted for the fifth time, this time in the Peerage of the United Kingdom, in 1881 to Prince Leopold, the fourth son of Queen Victoria. Prince Leopold's son, Prince Charles Edward (who had succeeded as reigning Duke of Saxe-Coburg and Gotha in 1900), was deprived of the peerage in 1919 for bearing arms against the United Kingdom in World War I. His grandson, Ernst Leopold (1935–1996), only son of Charles Edward's eldest son Johann Leopold, Hereditary Prince of Saxe-Coburg and Gotha (1906–1972), sometimes used the title "Duke of Albany", although the Titles Deprivation Act 1917 stipulates that any successor of a suspended peer shall be restored to the peerage only by direction of the sovereign, the successor's petition for restoration having been submitted for and obtained a satisfactory review of the appropriate Privy Council committee.

Dukes of Albany in fiction