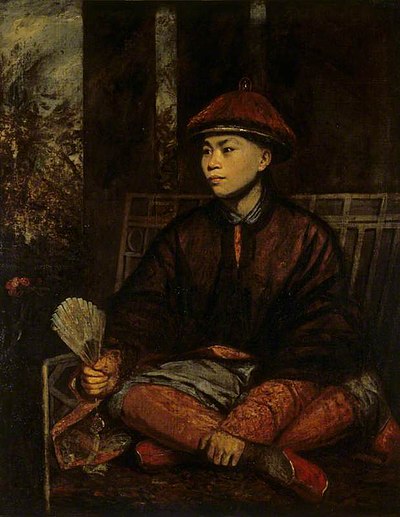 Little is known of Wang's early life. Having heard about Tan-Che-Qua's journey to and reception in England, Wang also decided to travel to England. He was brought to England from Canton by John Bradby Blake in the early 1770s. Blake was a supercargo for the East India Company, and also a naturalist, who was interested in Wang's knowledge of cultivating Chinese plants, and their culinary and medicinal uses. After Blake's death in 1773, Wang was taken into the care of Blake's father, Captain John Blake.

Wang visited the Royal Society on 12 January 1775. In a letter of 1775, he is said to be about 22 years old. He was visited at Blake's house, where he discussed the manufacture of Chinese ceramics with Josiah Wedgwood, and acupuncture with physician Andrew Duncan.

He became a page to Giovanna Baccelli, a mistress of John Sackville, 3rd Duke of Dorset, and lived at Knole in Kent, attending the nearby Sevenoaks School. The Duke commissioned a portrait of Wang in 1776, paying Joshua Reynolds 70 guineas, framed by Thomas Vialls. The painting is exhibited in the Reynolds Room at Knole, alongside portraits of other 18th century celebrities by Reynolds, including the Duke, Reynolds himself, Samuel Johnson, and David Garrick. In the Reynolds portrait, Wang is depicted sitting cross-legged on a bamboo chair, holding a fan, and wearing crimson and blue oriental robes, red shoes and a conical Asian hat. He has been described as a living example of chinoiserie. A portrait by George Dance the younger in pencil with watercolour is held by the British Museum, with Wang drawn in profile wearing European clothing.

Wang had returned to China before 1785. In December 1784, he was working as a trader in Canton when he replied to a letter from the linguist Sir William Jones asking for help with the translation of the Shijing.

He is mentioned in several 18th-century sources on China, including a satire by Lichtenberg, Von den Kriegs- und Fast-Schulen der Schinesen (published in the Göttinger Taschencalender for 1796). Lichtenberg translated his name as "yellow man from the east". It has been speculated that his family name may have been Huang and his given name Ya Dong – the characters of Huang and Dong also represent "yellow" and "east" – and his full name may have been Huang Ya Dong. This is supported by a note of his name, supposedly written in his own hand for Mary Delany, and copied into her letter to Mary Port of 11 June 1775.