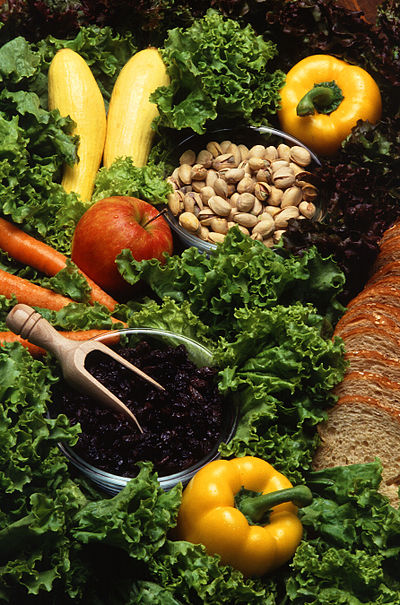 There are a wide range of possible vegetarian foods, including some developed to particularly suit a vegetarian/vegan diet, either by filling the culinary niche where recipes would otherwise have meat, or by ensuring healthy intake of protein, B12 vitamin, and other nutrients.

Food regarded as suitable for all vegetarians (including vegans) typically includes:

Foods not suitable for vegans, but acceptable for some other types of vegetarians:

Vegetarians by definition cannot consume meat or animal tissue products, with no other universally adopted change in their diet. However, in practice, compared to non-vegetarians, vegetarians on average have an increased consumption of:

In comparison to non-vegetarians, practising vegetarians on average have a decreased consumption of:

This difference is observed, but is not required to be vegetarian. Nevertheless, it is relevant when considering research into the health effects of adopting a vegetarian diet. A diet consisting only of sugar candies, for example, while technically also vegetarian, would be expected to have a much different outcome for health compared to what is called "a vegetarian diet" culturally and what is most commonly adopted by vegetarians.

These are some of the most common dishes that vegetarians eat without substitution of ingredients. Such dishes include, from breakfasts to dinnertime desserts:

Commercial products, marketed especially towards vegetarians and labeled as such, are available in most countries worldwide, in varying amounts and quality. As example, in Australia, various vegetarian products are available in most of supermarket chains and a vegetarian shopping guide is provided by Vegetarian/Vegan Society of Queensland. However, the biggest market for commercially vegetarian-labeled foods is India, with official governmental laws regulating the "vegetarian" and "non vegetarian" labels.

Vegetarian diets are associated with a number of favorable health outcomes in epidemiological studies. In a study supported by a National Institutes of Health grant, dietary patterns were evaluated along with their relationship with metabolic risk factors and metabolic syndromes. A cross-sectional analysis of 773 subjects including 35% vegetarians, 16% semi-vegetarians, and 49% non-vegetarians found that a vegetarian dietary pattern is associated significantly with lower means for all metabolic risk factors except HDL, and a lower risk of metabolic syndromes when compared to non-vegetarian diets. Metabolic risk factors include HDL, triglycerides, glucose, systolic blood pressure, diastolic blood pressure, waist circumference, and body mass index. Metabolic syndromes are a cluster of disorders associated with a heightened risk of diabetes and cardiovascular disease. Adventist Study 2 (AHS-2) compared mean consumption of each food group for vegetarian patterns compared to non-vegetarian patterns. Health benefits can be explained by increase in certain foods, not just the lack of animal products.

As evident by the Adventist Study 2 (AHS-2), the vegetarian diet does not always cause health benefits. This is dependent on the specific foods in the vegetarian diet. The National Institute of Health recommends a 1600 calories a day lacto-ovo vegetarian cuisine for the diet. This recommended diet includes oranges, pancakes, milk, and coffee for breakfast, vegetable soup, bagels, American cheese, and spinach salad for lunch, and omelettes, mozzarella cheese, carrots, and whole wheat bread, and tea for dinner.