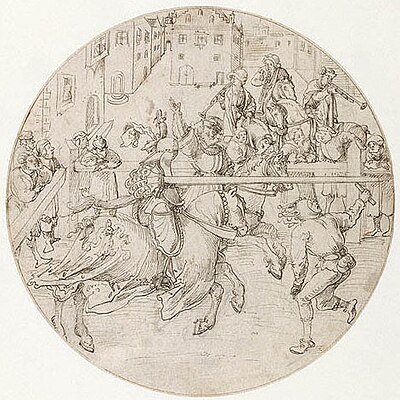 Lord Edmund Howard (c. 1478 – 19 March 1539) was the third son of Thomas Howard, 2nd Duke of Norfolk, and his first wife, Elizabeth Tilney. His sister, Elizabeth, was the mother of Henry VIII's second wife, Anne Boleyn, and he was the father of the king's fifth wife, Catherine Howard. His first cousin, Margery Wentworth, was the mother of Henry's third wife, Jane Seymour.

Howard spent his early years at court, and in 1509 he was listed as one of the noblemen who organized the jousts for the joint coronation of Henry VIII and his first wife, Catherine of Aragon. Although his eldest brother, Thomas Howard, 3rd Duke of Norfolk, became a dominant figure at court, and another brother, Edward Howard, was a close companion of the King, Edmund appears not to have shared the King's favour and seems to have been considered ineffectual.

Biographers have described Howard as 'a spendthrift who soon dissipated his first wife's lands in Kent and Hampshire and fled abroad to avoid his creditors, leaving his numerous children to be brought up by relatives'.

Howard was Marshal of the Horse at the Battle of Flodden on 9 September 1513, and attended the King at the Field of the Cloth of Gold in 1520, where he was one of the challengers in the tournaments. In 1530 or 1531, with the assistance of Thomas Cromwell, Howard was made Controller of Calais. He was dismissed from the post in 1539, possibly due to ill health after many years of ineffectual service, where he achieved very little, and earned even less.

Howard died on 19 March 1539, a year before his daughter, Catherine Howard, became queen of England. His widow, Margaret, was among the ladies appointed to serve her stepdaughter when her household was formed in August 1540. Margaret later married Henry Manock. Although Steinman conjectured that Margaret Mundy's third husband was the Henry Manox, who had been music master to Catherine Howard in her youth, and had been involved in sexual indiscretions with her which later contributed to her downfall, Bindoff established that Margaret Mundy's third husband, Henry Manock, made his will on 18 March 1564, in which he disinherited both Margaret and his son. Margaret (née Mundy) was buried at Streatham, Surrey, on 22 January 1565.

Howard and Joyce Culpeper had three sons and three daughters: